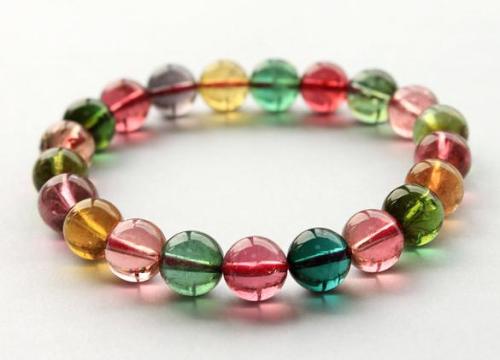 Tourmaline is also known as tourmaline. Five years ago, people saw this kind of gem thought it was stained glass. Today, however, it has become a new darling of the jewelry industry and the gift market. Recently, however, people often encountered counterfeit goods at the end of the year, and the people received a string of 8,000 yuan worth of tourmaline necklaces. So, what changes are there in the modern tourmaline market, and how do you buy counterfeit and price confusion?

The difference between genuine and fake tourmaline prices is very different

Last weekend, the public, Ms. Zhao, was introduced by her friend and she was handcuffed with a necklace to find Zhang Fan, a senior collector. She asked her to help identify, and the result made her very surprised. One of the bracelets was a birthday gift that her daughter bought for 200 yuan five years ago. The other tourmaline necklace was recently sent by Ms. Zhaoâ€™s business partner. It was allegedly worth 8,000 yuan. However, Zhang Fanâ€™s observation of bubbles and textures under a high magnification magnifying glass even discovered that the cheaper bracelet was genuine, and todayâ€™s market price Close to 2,000 yuan, the "Bi Sheng necklace" is actually filled with crystal glass.

Later, the reporter visited and found that in the small shops, all kinds of tourmaline bracelets or necklaces are basically messy, most of them only have a simple handwritten label, only the price above, and the origin, weight, grinding process and other content are not Callouts. The price of tourmaline in the market varies widely, ranging from 20 yuan to 7800 yuan per gram. In some large shopping malls, jewelry counters, on the ten million or even more than ten million yuan tourmaline jewelry is very common.

The auspicious meaning makes the tourmaline a gift

Since last year, Ms. Lin, the person in charge of Jiamei Arts & Crafts Co., Ltd., has noticed that many Dalian small-scale merchants are no longer introducing tourmaline from the wholesale markets in Guangzhou and other places. â€œThe annual increase rate is 30%, and some purchase prices are even higher than the terminal sales price in the previous year. The market for the tourmaline market tends to be high-end.â€ Yesterday, she told reporters that if consumers saw such colored gemstones five years ago, they would Q. Is the tourmaline a trick? Since 2009, Bradley has gotten a fire. When Carina Lau and Tony Leung were married, they wore 3 red tourmalines with a total of 41 carats. They were hyped by the media and promoted their sales to some extent. After that, Bibi jewelry began to appear in large numbers in the Dalian market. Various major brands have launched tourmaline jewelry. The legend of â€œMy Empress Dowager Cixiâ€™s favorite gemsâ€ has also been widely circulated. Until now, its limelight has been chasing diamonds and jade.

At about 10 a.m. the day before yesterday, the reporter randomly interviewed eight female consumers who had stopped in the jewellery sales area in the Green Nibble Business District. Four of them had more than one tourmaline jewelry. For reasons of purchase, they all mentioned that the color of the tourmaline is the most colorful of all the gems, and the choice is large. "The tourmaline has more than a dozen colors, different colors can be used with different clothes, can well reflect a person's style and taste." 36-year-old white-collar Yang Na said. Ms. Bi, the 43-year-old advertising agency manager, said that women's friends are now very popular with tourmaline. â€œMy friends around me have always loved Jade, but this year, news of Jadeâ€™s falling prices is often heard, so the group turned to more colors and prices. â€œStrongâ€ tourmaline.â€ In the interview, a young man from the tour desk caught the reporterâ€™s attention. He said that the purchaser of this colored gemstone is now not only restricted to females. â€œThe tourmalineâ€ is a homonym and it is not The few people pay more attention and are willing to wear it for good luck."

Tips: Although tourmaline sings a strong tone at the end of the year in the jewelry and gift market, the large number of fakes has added to consumers the risk of purchasing tourmaline. Zhang Fan, the most indignant thing is that there are phenomena such as the use of fluorite, quartzite and stained glass in the market. In addition, many tourmaline bracelets and necklaces are added with fillers such as glue and wax during processing. â€œAt present, tourmaline does not have a strict grading of diamonds. It is difficult for ordinary consumers to identify clearly the merits and demerits of tourmalines. It is advisable for those who are preparing to invest in collections or gifts to commission a professional accreditation body to carry out the appraisal and purchase. Or go to some stores in the mall to buy tourmaline with an appraisal certificate, which is more secure."