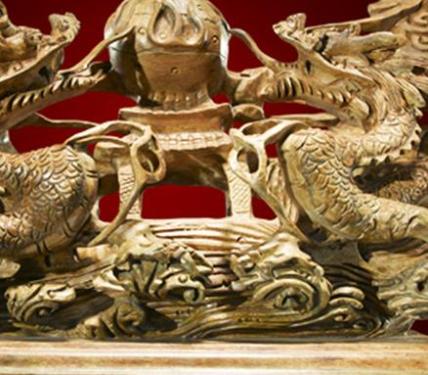 At the end of the year of the Dragon is a good season for the sale of wood carving crafts. Many customers will come to Woodcarving City to buy wood carving crafts and send them to people. Such as red rosewood cosmetic gift boxes and fruit boxes are very popular among people.

Due to the excellent craftsmanship of wood carving handicrafts, it is carved from precious wood and has a high collection value. It is very popular among people. With the growing popularity and influence of Dongyang China Woodcarving City, more and more people have chosen to choose wooden carving gifts from the Chinese Woodcarving City, especially some Dongyang people who work outside the city, sending woodcarving arts and crafts as a hometown gift to their friends and colleagues. Mr. Zhang from Nanma Town is one of them.

Mr. Zhang is engaged in the construction industry in Henan. This time, he brought two friends to Woodcarving City to help him purchase wooden handicrafts. He said: â€œWith the improvement of living standards, peopleâ€™s interests in art appreciation and aesthetics are getting stronger and stronger. , I like some high-end wood carving crafts. We have a reputation for Dongyang wood carvings. I chose wood carving crafts, gifts, fashion and taste."

In the past 2012, Dongyang China Woodcarving City achieved annual sales of 10.5 billion yuan. In 2012, China Woodcarving City formulated and implemented a series of systems such as commercial integrity and civility assessment, adopted a series of measures to standardize the market order, strengthened the education and guidance of business households for honest business operations, strictly regulated the sales of woodcarving mahogany furniture, and implemented the â€œone certificate and one certificateâ€. "Book one vote" mark marking work; through the paste of the nature of shop signs and red lines, strictly regulate the management of shops and goods placed in the public area; the introduction of clearing shop clearance requirements, and seriously deal with illegal speculation, disruption of business order behavior. In addition, it also carried out a series of special rectification work such as occupation of roads, random dumping of cargo, and super-heavy and over-heavy goods, which changed the market's dirty, chaotic, and bad phenomena. The marketing department conducts statistical analysis on the number of operating households, business conditions, and shops in the jurisdictional area, and provides timely feedback.

In 2012, China Woodcarving City held the 7th East Expo and set up more than 900 booths in 34 exhibition areas. It attracted more than 300 exhibitors from 27 regions across the country with a turnover of 300 million yuan. Organizing business households participated in the 7th China Channel Arts & Crafts Fair, 2012 China Yiwu Cultural Products Trade Fair, the 8th China (Shenzhen) Cultural Industry Fair and Dongyang Arts & Crafts 2012 Hangzhou Grand Exhibition. The company's overall image design of the exhibition has been transformed into new ones: the scale of the exhibition is more than 200 square meters, using modern scientific and technological means such as sound, light and electricity, setting up large screens, touch screens, etc. in key areas, increasing the channels and channels of information publicity, and enhancing the audience. Interactive participation effect.

In the off-season, China Woodcarving City actively prepared the â€œTaobao Woodcarving City, Shopping Scratch Awardâ€ campaign. In three days, it issued a total of 979 lottery tickets and achieved sales of about 2 million yuan. From August 4th to August 12th, China Woodcarving City hosted the â€œTreasure Hunting Â· Capitalizing on China's Woodcarving Capitalâ€ activity, attracting more than 3,000 treasurers from Dongyang and surrounding counties and cities, and even Shanghai, Anhui, and Fujian. , A collection of more than 5,000 pieces of art collections such as porcelain, calligraphy and paintings, bronze wares, jade wares, wood carvings and miscellaneous items were collected, and 68 items were recorded for the program.

Keep your look cool and effortless with help from Long Pants. These rad skinnies boast an acid washed design, a traditional 5-pocket design, a durable stretch fabrication, and a go-to skinny fit for just about any look.

These road-ready pants have a movement-oriented fit for multifunctional mobility, blending the comfort and breathability of organic cotton with the long-lasting durability of nylon with a DWR (durable water repellent) finish.